The naYana phonetic alphabet is created by Nagarjuna G. and Vickram Crishna and few other collaborators and interns at the gnowledge lab (https://www.gnowledge.org) of Homi Bhabha Centre for Science Education (https://www.hbcse.tifr.res.in), Tata Institute of Fundamental Research (TIFR) at Mumbai in India (See full credits below). The current version is a result of iterative development that started around 2012. The protoype OTF font for the alphabet with latin keyboard mapping is designed and developed by Nagarjuna G.Download the OTF font.

The ability to produce a variety of vocalizations and other sounds through the buccal cavity gives human beings, so to speak, a speech engine. According to Ethnologue there are over 7000 different languages spoken around the world. If we take IPA (International Phonetic Alphabet) as an indication of the variety of vocalizations that we can generate, we have about 107 sound symbols for each phoneme, plus about 50 diacritics generating variations of the sounds and a few intonations. None of the languages use all of them. For example, English uses only about 24 consonants and 20 vowel forms to produce variations; Hindustani has about 28 consonants and about 8 vowels. Taa language, spoken in Botswana, is considered to have the largest number of phonemes including non-vocal click sounds, with about 60 consonants and about 30 vowels. Each of these phonemes need a corresponding alphabet, and IPA does provide that. However, IPA is a linguistic exercise and not developed for literacy. There are some attempts to make the IPA encodable within 7-bit ASCII range, e.g. X-SAMPA (https://en.wikipedia.org/wiki/X-SAMPA), which is now used mostly as an input method for IPA. If universal literacy is the motive, we need a script that is easy to learn, easy to learn another language. extendable and localizable without violating the design principles, and finally preserving and provisioning for the diversity of expression.

The end result: a script where learning to spell a word is made redundant, and no spelling olympiads can be held.

A word about celebrating cultural variation. Often we hear arguments that any attempt at a universal code goes against human history and cultural variation. Common code does not eliminate diversity of expression within a wider population, on the other hand it becomes a base for inclusive participation. Trascriptional unity can generate translational diversity is well evidenced by a common genetic code, where four letters and 64 words generated the organic diversity which is key for organic evolution. We hope naYana project will enhance cultural diversity and localization through transciptional unity and universal literacy.

Most of the shapes used in the design of naYana alphabet are widely available within the very large unicode set of most common fonts. Some of the shapes are created by rotating them, and by doing a union or diffrence operation of the outlines from existing shapes. No distinction between capital and small letters is proposed. The prototype font (naYanakamik is derived from Comik Neue Regular)

Additional vowel forms can be created by a combination of the base vowels, e.g. au, oi, ui, ae, ea ou etc. When necessary localized interpretations can be defined for each langauge or dialect.

Sharper contact at the end of the palate genetates /k/, therfore k is chosen. A softer blunter variation of k generates /g/, hence g. Few of the first consonant vocalization generated by infants are various bilabial sounds. Starting with simple p for /p/, f for /f/, b for /b/, and m for /m/ is proposed. Since /b/ and /v/ are closer sounds, while the latter is produced by open lips to leave a little space for the air passing through, we created v by opening b. The /t/ is generated when tongue touches the palate almost at the middle, so t is chosen, and toungue touching the teeth gives us /ɵ/, so we chose T. For /d/ we chose capital delta from the greek letters, because it needs a sharper shape, and for /ð/ a rounded and smoother form of delta, a rounded heart shape d. l shape is chosen for /l/; a crossed R for /r/; s for /s/; Y for /j/; n for /n/ were chosen from the widely used simple shapes. /t̠ʃ/ is produced when tongue flatly touches the palate, hence c. j,z are made with slight variation of j for /d͡ʒ/ and /z/ respectively. The choice of H for /h/ is intuitive, also being at the margin of being a vowel and a consonant, created by linking the roof and the floor. By inserting modifiers to this basic set of consonants, we can create localized versions as and when necessary. As and when necessary, more simple shapes can be inserted into the alphabet, holding to the above design principles.

The number shapes were created keeping semantics of the decimal number system. 6-9 are created by inserting stroke modifer of 1-4. The number 5 is represented as half of 10, hence D. The need to create special symbols for numbers is arising from using some of the number shapes for the consonants, e.g. s, m and T for /s/, /m/ and /ɵ/. 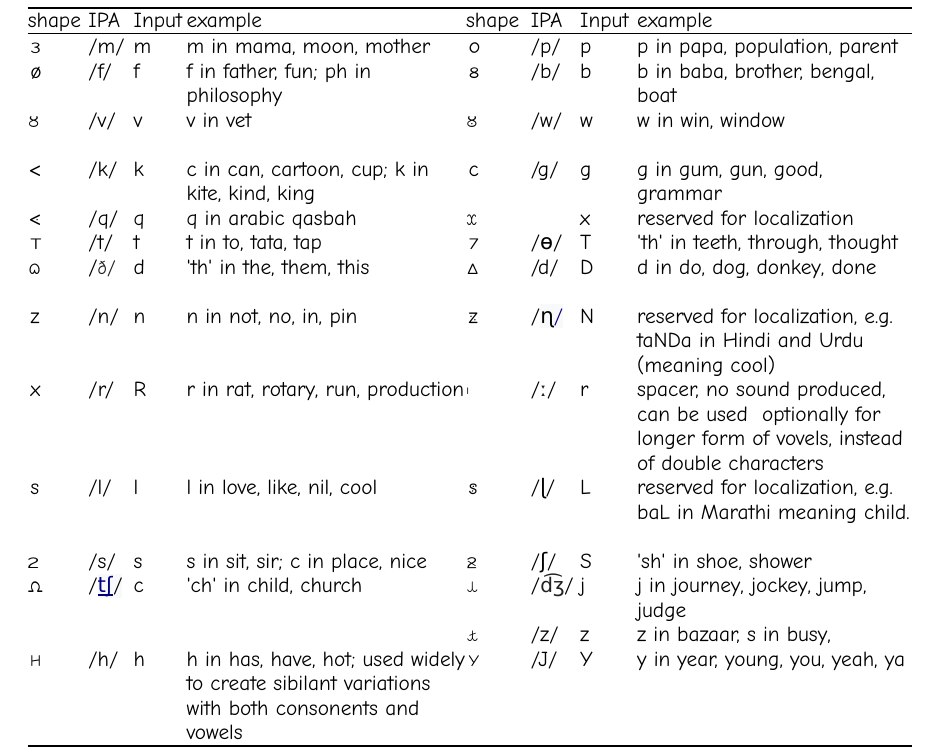 Table 2: Consonants with the shape, IPA phoneme mapping, proposed input character for typing on a regular QWERTY keyboard, with examples.

Article 1 of Universal Declaration of Human Rights is transcribed in multiple langauges below:

All human beings are born free and equal in dignity and rights. They are endowed with reason and conscience and should act towards one another in a spirit of brotherhood. (Article 1 of the Universal Declaration of Human Rights)

Article 1 of UDHR in Hindi

Article 1 of UDHR in Marathi

Article 1 of UDHR in Telugu

Article 1 of UDHR in Sanskrit

Name for the alphabet given by: Rafikh Shaikh

Translations of UDHR taken from https://unicode.org/udhr/index.html